2012's Best Smart Growth Projects, According to the EPA

A food store in Vermont, rezoning in Portsmouth, and five other neat efforts.

Today, the Environmental Protection Agency announced seven winners of its 2012 National Awards for Smart Growth Achievement. As I have noted in the past, the smart growth awards are given for creative, outstanding initiatives that protect the health and the environment of our communities while also strengthening local economies. One of this year’s winners is a personal favorite, Denver’s Mariposa (South Lincoln) revitalization.

The 2012 award winners are being recognized in four categories, below:

Overall Excellence
BLVD Transformation Project, Lancaster, California
The redesign of Lancaster Boulevard helped transform downtown Lancaster into a thriving residential and commercial district through investments in new streetscape design, public facilities, affordable homes, and local businesses. Completed after eight months of construction, the project demonstrates how redesigning a corridor guided by a strategic vision can spark new life in a community.  The project has generated almost $300 million in economic output and nearly 2,000 jobs.

Equitable Development
Mariposa District, Denver, Colorado
It’s hard for me to overstate how much I love this project. In particular, the redevelopment of Denver’s historic and ethnically diverse South Lincoln neighborhood is turning an economically challenged area into a lively and transit-accessible community enthusiastically supported by current residents. The community’s master plan preserves affordable housing while adding energy-efficient middle-income and market-rate homes. Influenced by extensive community engagement, the newly named Mariposa development will include actions to improve the health of residents, reduce pollution, and control storm-water runoff.

Main Street or Corridor Revitalization
The Cooperative Building, Brattleboro, Vermont
The Brattleboro Food Co-op, the town’s only downtown food store, made a commitment to remain at its downtown location by constructing an innovative, four-story green building on Main Street that will include a grocery store, commercial space, offices, and affordable apartments. The Main Street location provides healthy food, new jobs, and housing within walkable distances of downtown businesses and public transit.

Programs and Policies
Destination Portsmouth, Portsmouth, Virginia
The city of Portsmouth revised its comprehensive plan and undertook a broad review of its development and land use regulations. As a result, the initiative Destination Portsmouth prepared a package of new plans, zoning ordinances, and other development policies in collaboration with community stakeholders.The overhaul of the city’s codes encourages development in targeted growth areas and helps businesses to locate in the city while also protecting the character of Portsmouth’s historic neighborhoods. 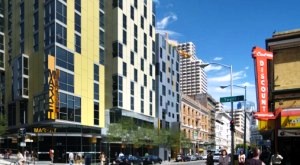 Programs and Policies - Honorable Mention
Bay Area Transit-Oriented Affordable Housing Fund, San Francisco, California
The Bay Area Transit-Oriented Affordable Housing Fund is providing loans for developers to build affordable homes near public transportation. At this point, the fund has provided loans for a 153-unit building for low-income families located two blocks from a major transit station, and for a 64-unit building for seniors close to a light rail station that will provide free transit passes for all residents.

I am a longtime fan of EPA's work on these issues and of this awards program. A press release issued by the agency says that this year’s winners and honorable mentions were selected from 47 applicants from 25 states. The winning entries were chosen based on their effectiveness in creating sustainable communities; fostering equitable development among public, private, and nonprofit stakeholders; and serving as national models for environmentally and economically sustainable development.

In the past 11 years, 54 honorees from 26 states have shown a variety of approaches that states, regions, cities, suburbs, and rural communities can use to create economically strong, environmentally responsible development. EPA’s Office of Sustainable Communities manages the awards program.

EPA will host a ceremony on December 5th to recognize the seven honorees.

This post originally appeared on the NRDC's Switchboard blog.

Kaid Benfield is the director of the Sustainable Communities and Smart Growth program at the Natural Resources Defense Council, co-founder of the LEED for Neighborhood Development rating system, and co-founder of Smart Growth America.