Almost All of the Shrimp Americans Eat Is Now Going Uninspected

It’s day seven of the U.S. government shutdown and imported food Americans are eating is passing through with little of the inspection it’s normally given.

Thanks to the shutdown, food safety inspectors at the Food and Drug Administration, which monitors 80 percent of America's food supply, are on furlough until the budget gets passed, as Food Safety News reports.

That means the FDA isn't carrying out some of its most critical responsibilities. First is the FDA’s oversight of food imports. The furlough means more than 90 percent of the foreign seafood Americans eat is coming through unchecked, as well as half the fruit and one-fifth of the vegetables.

One of the big ways the FDA protects consumers is by blocking shipments from companies with a history of tainted foods, monitoring them through what it calls :red alerts." These include categories like filthiness (meaning excrement), fruits covered in pesticides, drug-doped seafood, dairy products with melamine, dietary supplements that might have mad cow disease, e. coli-containing seafood and candy laced with lead.

The FDA blocks shipments from tens of thousands such violators. Now, however, there’s no one to stop those foods from finding their way onto American plates.

Take shrimp for example. Americans now eat 4.2 pounds a year, way more than any other type of seafood. Some 90 percent of that is imported, much of it from Thailand, Indonesia, India and Bangladesh: 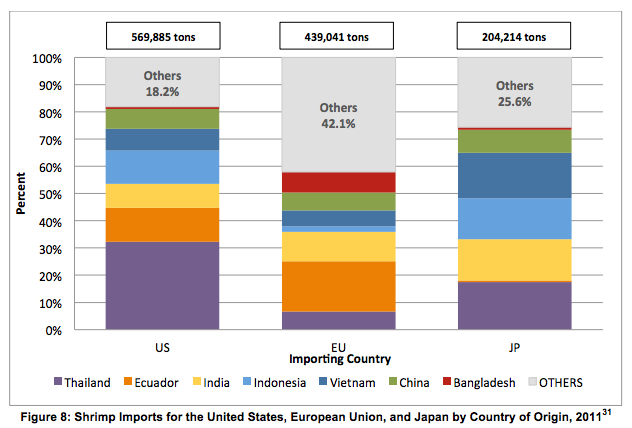 So consistently has shrimp imported from those four countries arrived already decomposed, covered in filth or teeming with salmonella, that FDA flags all shipments as "red alerts" (companies are exempted only after demonstrating health standard compliance).

That means Americans might unknowingly be chowing down on red-alert shrimp. If that were to cause a nationwide outbreak of, say, salmonella, the FDA would normally step in to prevent people from eating more.

Not now. Though the FDA says it will continue to act on "high-risk recalls" (pdf), Caroline Smith DeWaal, the food safety director of a non-profit group called the Center for Science in the Public Interest, doubts that’s sufficient. "I don’t have confidence that they have the capacity to recognize an emergency and respond to it," DeWaal told the Christian Science Monitor.

Note that county health authorities are still managing local problems, such as the salmonella outbreak that’s killed one person in Kentucky so far.

But county officials can’t do much when the outbreak comes from shipped food, as opposed to shoddy hygiene. The food-related outbreaks cross borders too, such as the outbreak of a rare strain of Hepatitis A that sickened 162 people in 10 states across the U.S. throughout the summer. The FDA traced the strain to a Townsend Farms Organic Antioxidant Blend sold at Costco, prompting a recall. After the FDA isolated the culprit, berries imported from Turkey, it placed the responsible company on red alert.